Whether you bought your OnePlus One in the summer of '14, or only bought your OnePlus 5 yesterday, you'll know for sure that OnePlus devices have very fast hardware and lots of storage space. That's great, because you'll be able to open your favourite apps and games in no-time and you may store thousands of pictures in super high quality - all without a hiccup.

But, how fast are the older devices in today's world? Do you really need to upgrade to a newer device, or does your old device still suffice all your needs? Well, lets take a look at the facts.

In this article, I'll guide you through a series of benchmark scores taken from the complete lineup of OnePlus devices. Even though benchmarks don't reflect real-world performance very well, they still give a decent insight in the raw performance capabilities of a device.

Finally, I'll provide some info on real-world performance, as I'm still using the original OnePlus One myself. If you have a newer device, it can only be faster than the results described in this article.

One of the most popular way to benchmark a device, is to measure it's processor performance. The processor handles all activities you do, like opening apps, browsing the Web, and sharing your favorite photos on Facebook. Without a fast processor, all these things take more time.

The first benchmark I'll cover is GeekBench, made by Primate Labs.

The GeekBench tool runs a series of processor tests and assigns your device a score. The higher the score, the faster the processor of your device is. 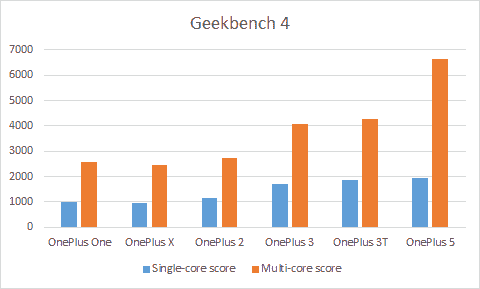 Geekbench 4 scores of all OnePlus devices. [1]

In the figure above, you'll see an interesting fact: The OnePlus One, OnePlus X and OnePlus 2 perform very close to each other. The relatively poor performance of the OnePlus 2 is likely caused by its Snapdragon 810 chipset, which is known for slowing down to prevent overheating of the device.

Also, the OnePlus X is slightly slower than the OnePlus One, but that is easy to explain: It sports the same processor as the One, but runs it at only 2.3 GHz instead of the One's 2.5 GHz per core.

The OnePlus 3 and 3T are a lot faster than the older devices and perform very close to each other. That is completely logical, as the 3T was only a very minor upgrade compared to the 3.

The OnePlus 5 puts all other devices at a far cry behind, by achieving a score of over 6500 points. This is one of the highest Geekbench scores ever achieved, coming in very close to the Galaxy S8. In a nutsheel: this device has a blazing fast processor and isn't likely to slow down in years.

As the processor isn't the only important piece of hardware in any computer or phone, comparing processor scores doesn't present you the whole picture of the evolution of OnePlus devices.

Antutu tests multiple parts of a device, including its Graphics chip, its processor, its memory (RAM) and various software-related aspects (Web browsing performance, in example). All these test results are combined into a single score, which gives a rough indication of how fast one's device is. 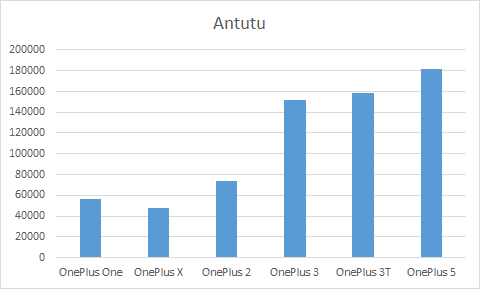 Antutu scores of all OnePlus devices. [2]

The OnePlus 3, 3T and 5 stand relatively close to each other, but are miles faster than any of the older devices. Especially their graphics chips outperform the legacy devices with ease. The OnePlus 5 is relatively slow, because the graphics chip didn't improve as much as its processor. Still, it's currently (2017/07/29) the fastest device in the official Antutu rankings, with a score slightly over 18000 points.

OnePlus devices have always been very fast. Even the oldest devices are still useful in today's world. For example, I'm still using my OnePlus One which I bought in the end of 2014. It can run all my apps, plays almost all new games at pretty high settings and its battery still lasts pretty long. The big leap between the OnePlus 2 and 3 makes the newer devices a lot faster, but you'll probably only notice this in a few years, when apps have become even larger than they currently are, and they take more advantage of the chipset found in your phone. So should you buy a new phone? It's entirely up to you. From a performance aspect, you shouldn't. But if you like the better cameras, fingerprint scanner, OxygenOS software or perhaps an OLED screen? I'd say go for it!

Note: All performance tests are based of online results, as I don't have all these devices myself. Small variations in benchmarks are possible, which may or may not adjust one's view of the performance of them.

[1] Scores obtained from Geekbench browser (result obtained from the middle page of each device. Let's say a device has 200 pages of results, page 100 was taken.)