The phone gets a custom MediaTek Dimensity 1200-AI-SoC, along with a 6.43" AMOLED-display featuring a 90Hz refresh rate at a resolution of 1080x2400 pixels. The primary camera of the OnePlus Nord 2 5G is the ultra-wide camera of the OnePlus 9 (Pro). It's the 50 megapixel Sony IMX766 with OIS. The Nord 2 5G also has an 8 megapixel ultra wide-angle camera (without OIS, but with EIS) and a 2 megapixel monochrome camera. The front camera is a 32MP one; the IMX 615.

As for the battery, OnePlus put a 4500mAh battery that can be charged with Warp Charge 65. The phone runs OxygenOS 11.3, which is based on the merged codebase of OnePlus and OPPO. The company gives two major Android upgrades and three years of security updates.

The Nord 2 5G will be released in two colour variants (three in India): Green Wood, Gray Sierra and Blue Haze. India will get the Green Wood as extra colour option. There'll be three options:

OnePlus has confirmed that the OnePlus Nord 2 5G will be officially announced by the Chinese company on the 22nd of July. The phone will be released in Europe and India. According to Pete Lau (OnePlus' CEO), "the Nord 2 5G is a comprehensive upgrade from the first OnePlus Nord, from camera to performance to charging, as well as the newly AI-focused Dimensity 1200-AI SoC." This is the second time OnePlus confirmed that the Nord 2 will get the MediaTek Dimensity 1200-SoC. On the 7th of July, they've mentioned this in a forum post as well.

In an interview with XDA, Oliver Zhang (OnePlus' Head of Product) exemplifies the choices of the Nord 2. He says that OnePlus went for a MediaTek chip because of "the performance and experience it allows us to deliver at the price point we're targeting." So it is likely that OnePlus went with this SoC, because it is cheaper in comparison to a Snapdragon, whilst getting better performance in return. In the interview they're also talking about many different AI enhancements. Mr. Zang says that the Nord 2 will have the same 6.43-inch AMOLED 90Hz display as the original Nord, but that AI-enhancements will improve the display experience compared to the Nord 2's predecessor. Further on, the OnePlus Nord 2 5G will be the first phone with OxygenOS 11.3, that will be based on the merged codebase of OxygenOS and ColorOS, which we wrote about earlier. This merge should improve "more timely and more stable updates". The bootloader on the OnePlus Nord 2 can still be unlocked.

91Mobiles also posted the front-facing renders of the OnePlus Nord 2, in collaboration with Ishan Agarwal. As we can see, there's no dual front camera (which was present on the original Nord.)

OnLeaks, a trusted leaker, published new renders of the alleged OnePlus Nord 2 in collaboration with 91Mobiles. The phone's dimensions will be 160x73.8x8.1mm. On the renders below we can see that the phone looks a bit like the OnePlus 9, due to the position of the front camera, as well as the camera island on the back. The screen seems like a flat one and will be running at 90Hz. Another thing to note is that it will have an alert-slider, just like its predecessor, the OnePlus Nord. The budget phones of OnePlus don't have an alert-slider at all.

Earlier, the phone also appeared on AI-Benchmark, showing a tested variant with 8GB RAM and the MediaTek Dimensity 1200 SoC. 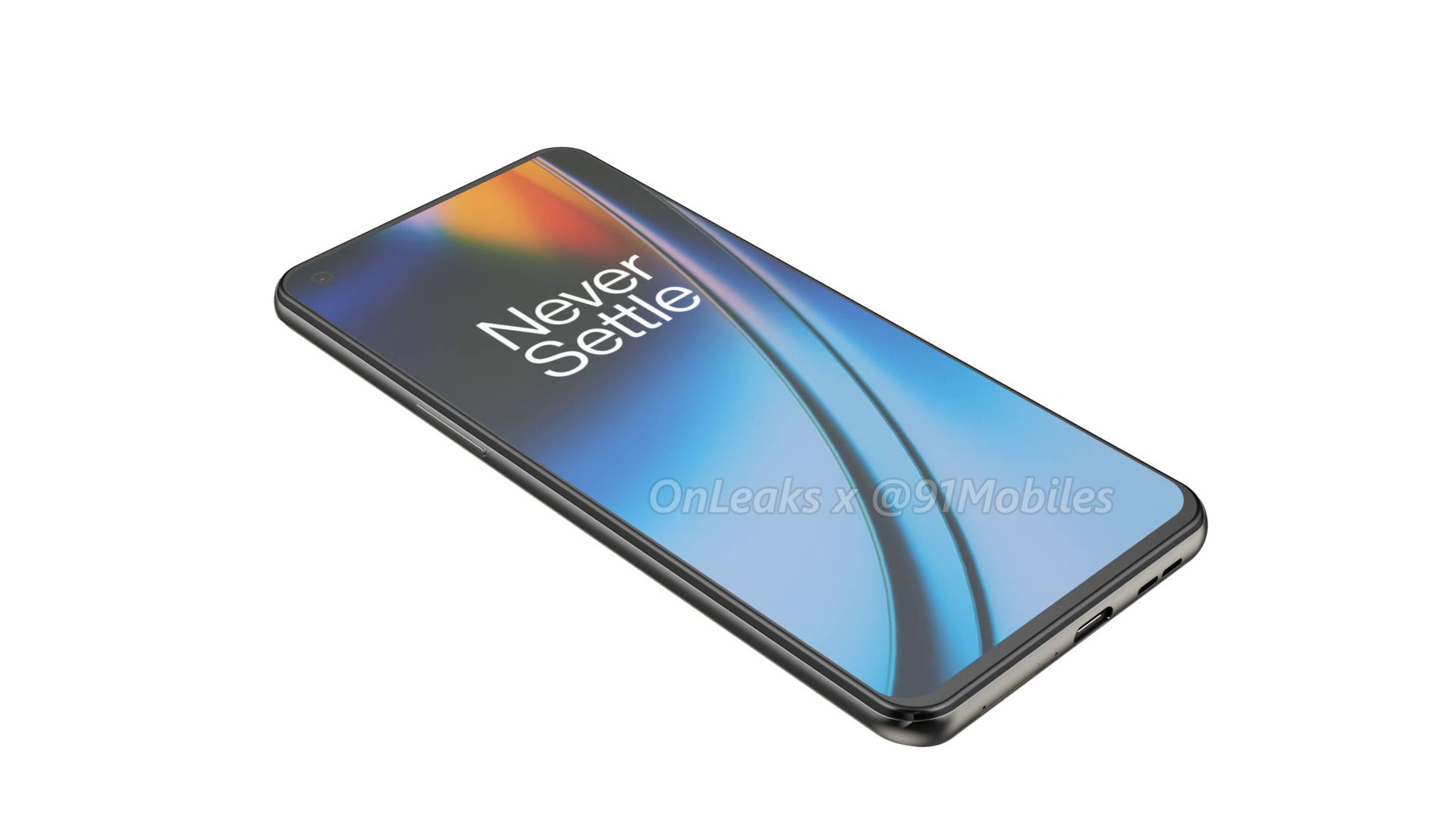 EvLeaks, formally known as Evan Blass, tweeted an image which is the wallpaper of the OnePlus Nord 2. You can see it below.

The original OnePlus Nord got announced on the 21st of July 2020. Now, almost a year later, OnePlus is supposedly coming with a successor: the OnePlus Nord 2.

OnLeaks and 91Mobiles reported that the Nord 2 will be launching on the 9th of July with a 6.43-inch FHD+ AMOLED display, running on 90Hz and an in-display fingerprint scanner. The phone will also pack 8 or 12GB RAM, along with 128 or 256GB of storage. The SoC will be a MediaTek Dimensity 1200, which has eight cores. This might sound like an odd move, as the first-gen Nord had a Qualcomm Snapdragon SoC. Also, this is the first OnePlus device ever that will feature a non-Qualcomm SoC. There will be three cameras: a 50, an 8 and a 2MP one. What is remarkable, however, is that the last year's OnePlus Nord had four cameras on the back. According to rumours, the 50MP camera is the Sony IMX766. The front-facing camera will be 32MP, just like on the OnePlus Nord. The battery is allegedly a 4500mAh, which is noticeably bigger than the 4115mAh one of the original Nord. There'll also be a USB-C port and headphone jack.

According to the tipster (OnLeaks), the OnePlus Nord 2 is going to cost about 22,300 INR, which is about 251 euros (roughly converted).

Earlier, on the 22nd of March, OnLeaks shared some renders of the alleged OnePlus Nord 2. On the renders we can see that the cameras on the back are now positioned on a camera island. The chin and bezels also seem smaller than on the original Nord.

We'll update the article when we're made aware of more detailed specifications.