OnePlus has launched two OnePlus Y1S Pro TVs already earlier this year. This TV initially came in two variants: a 43" and 50" model. Now, according to Ishan Agarwal and 91Mobiles, there's now a 55"-variant coming. Not just that; Ishan Agarwal has shared renders of this bigger variant of the Y1S Pro TV. It looks almost the same as its smaller siblings of course, as it's the same TV, but bigger. On the render below, we can see that it has slim bezels and that there's a small chin on the bottom of the TV, which includes a logo of the brand. The render also contains the remote controller, which shows a dedicated Netflix, Amazon Prime, Disney+, Hotstar and Google Assistant button. Furthermore, we can see the volume buttons, as well as a home button, back button and navigation buttons. There's also a button that indicates the source. The OnePlus logo on the remote should be the on-off button. 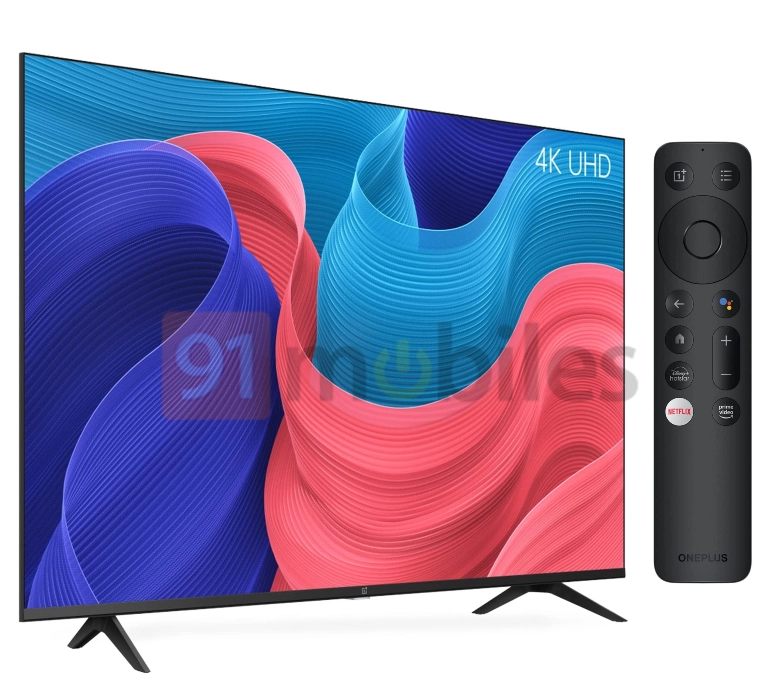 This larger variant also has a 4K-resolution and comes with Android TV out-of-the-box. The website says with a doubt that "the will support all major OTT apps and at least 24W speakers with Dolby Atmos support". It'll also support HDR10+ and MEMC (Motion Estimation Motion Compensation). It comes with two USB 2.0 ports and three HDMI 2.1 ones, as well as an RJ45 and one RF port. The TV comes with AI-powered visuals, as well as something what OnePlus calls 'content optimisation' and dynamic contrasts, which should automatically bring improved colour reproduction. This may be obvious, as those are features that the smaller variants have. As of the hardware that the TV runs on: there's a MediaTek MT9216 on board in combination with 2GB of RAM and 8GB of storage. The TV also comes with a Smart Manager, which should help with optimising the performance of the TV. According to 91Mobiles, the TV should run on Android 10 TV OS, which is relatively old, as Android 12 TV is already out since quite some time. In fact, Android 13 is currently in beta. Android 10 TV OS supports Google Assistant and Google Chrome out-of-the-box and features Bluetooth 5.0 support and dual-band Wi-Fi. Last but not least: there's support for OnePlus Connect 2.0, which is a way to seamlessly connect your OnePlus device with your OnePlus TV. The TV may be announced soon and will only come out in India, just like the smaller variants have been India-only.