For years, OnePlus only had phones as keypoint to sell. Until 2018, where OnePlus announced they were working on a OnePlus TV. They asked the community for a name, but in the end OnePlus chose to stick with the initial name: OnePlus TV.

At that time, OnePlus said they wanted to develop a TV that's smart and focuses on style, image quality en audio quality, to 'connect it with other devices in your house'. Their plan was also to include a virtual assistant, like Google Assistant.

As mostly happens with unreleased products, specifications and other information gets leaked. At the Bluetooth SIG, it appeared that OnePlus will release several sizes of the TV: 43, 55, 65 and 75 inches. It might be that the 75"-variant is only for the Chinese market and the 43"-variant only in India. The TV will run Android TV as Operating System.

OnePlus confirmed in an interview with Business Insider that they will indeed launch a TV with QLED-displays with 4K-resolution and wants to compete with other manufacturers in the premium TV market with a premium price-tag. However, there won't be a TV-model with an OLED-display. Pete Lau said: "price difference doesn’t match the quality difference.", because according to Pete Lau, OLED-panels are more expensive and thus not worth the extra money.

Furthermore, AndroidTVRumors claimed to know the hardware-specifications of the TV. According to them, it should feature the following hardware:

About the display: this differs per model.

OnePlus themselves said the TV will also feature a gamma chip that 'can produce cleaner and smoother videos'. 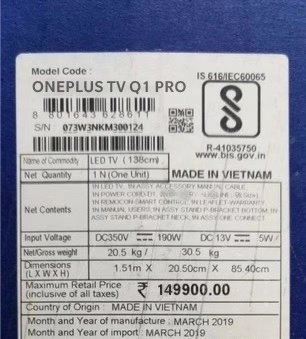 Update, 19-09-2019: some more information and photos got leaked, which shows the remote controller and TV + packaging: http://www.247techie.in/exclusive-look-at-the-oneplus-tv-india-price-specifications/