It's almost 2020. Christmas is just around the corner, New Year's eve is only a few days away.

With a new year being so close, we wanted to share an overview of the past year and highlight how Oxygen Updater will be at your service in 2020.

2019 was the year when Arjan Vlek transferred ownership to a new team of developers, being lead by Adhiraj Singh Chauhan. The transfer happened in mid-August. Here are some growth comparison metrics:

August 2019 - December 2019: 156,838 active users to 269,306. That means in these 4 months since the transfer, we grew our userbase by 112,468. Can you imagine that? We already beat last year's growth counts, and we're set to achieve 1 million downloads on the Play Store by August 2020. This wouldn't have been possible without you, our trusted users. Thank you so much for believing in Oxygen Updater, and having unwavering confidence in the new team. We're thinking about exciting ways to give back to our community. Stay tuned for that!

Here's a screenshot of the current total downloads, you can clearly see the immense growth after 09/2019: 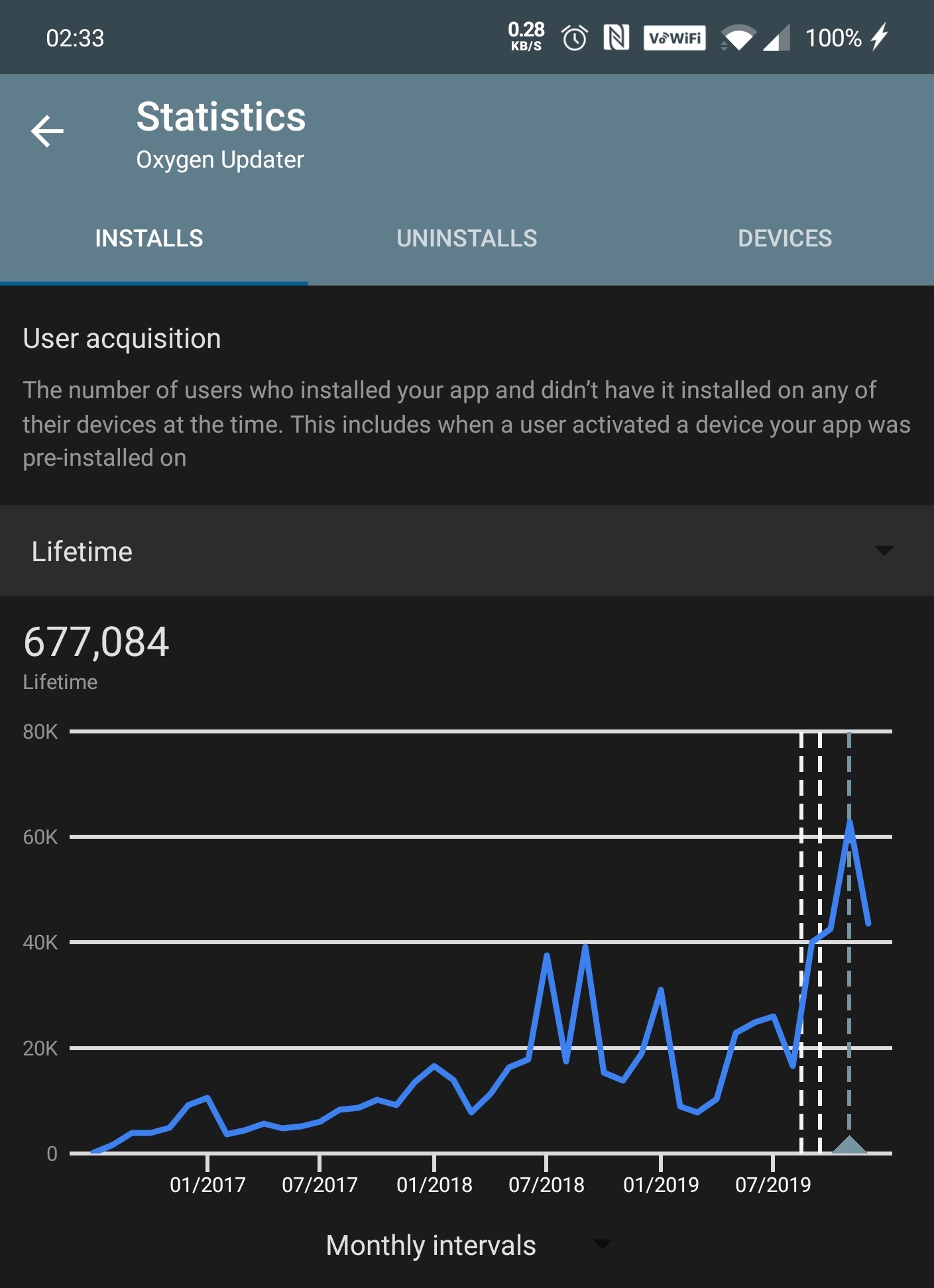 In case you're unable to see the screenshot (imgur has rate-limits), click here.

The app is used a lot, almost every moment someone is opening or refreshing the app.

During 2019, we quickly added support for the newest OnePlus 7T-series, and numerous updates were released & made available in the app. We even helped our users navigate their way through OnePlus' absolute mess of an Android 10 rollout. Initially, they rolled out buggy software to devices like the OnePlus 7-series, and OnePlus 6/6T users experienced the most major bugs. Our team worked round the clock to offer support to disgruntled users, to help them solve these issues or rollback to OxygenOS 9. Let's hope OnePlus won't make such mistakes again. After all, they're yet to release the Android 10 update for 7 Pro 5G in Q1 2020, and the 5/5T devices in Q2 2020.

During the last part of 2018, when Arjan was still maintaining this project, we had some tougher moments, as the app became unable to automatically import updates due to a change on OnePlus' side. For a short while, the future of the app seemed to be uncertain, but with the help of the community everything was back to normal. Thank you to all our contributors who submit file name to our admins, as well as the Discord users who've taken time out of their lives to add update data manually, so that all our users can benefit.

Here's the number of users who've opted in to send update file names to our admins:

After the transfer, we overhauled the app (especially the settings screen) to follow Material Design guidelines, and the user feedback was overwhelmingly positive. We have even more design updates planned, which should rollout in the coming few months.

The focus will be on continued growth and active development, as well as planning exciting things for the community. We'll announce these "exciting things" on our Discord server, and we'll also release a news post so that users who aren't on Discord don't miss out.

We hope you've enjoyed using Oxygen Updater so far. We wish you a Merry Christmas, and a Happy New Year! Cheers to a bright future in 2020 and beyond!